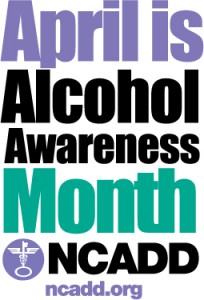 There are 2.5 million alcohol-related deaths worldwide every year. Approximately nine percent, or 320,000 of those deaths, are among young people aged 15-29.

April is Alcohol Awareness Month, and there are many ways to get involved to help create awareness and encourage individuals and families to get help for alcohol-related problems.

The National Council on Alcoholism and Drug Dependence (NCADD) has sponsored Alcohol Awareness Month every April since 1987 and provides all the information and resources you’ll need to support this cause.

The theme for this year’s 2015 NCADD Alcohol Awareness Month was chosen to highlight the pervasive impact that alcohol, alcohol-related problems and alcoholism have on individuals, on families and children, in the workplace and in our communities: "For the Health of It:  Early Education on Alcoholism and Addiction."

The NCADD provides many resources that help bring light to this issue and we are all encouraged to share them widely:

Drinking Too Much Too Fast Can Kill You

"I Wasn't Having Fun Anymore"

Local NCADD Affiliates as well as schools, colleges, churches, and countless other community organizations will sponsor a host of activities to support this cause.

Many organizations have already joined in and are doing their part to raise awareness, including the following:

If you’re interested in hosting an event or spreading the word, NCADD also has an “Organizer’s guide” to make it easy and effective in your community! The Organizer’s guide includes:

The National Association of State Alcohol and Drug Abuse Directors, Inc. (NASADAD) “…purpose is to foster and support the development of effective alcohol and other drug abuse prevention and treatment programs throughout every State.” NASADAD has recently achieved this purpose by the development of the State Adolescent Substance Use Disorder Treatment and Recovery Practice Guide (see link below).

The Center for Juvenile Justice Reform (CJJR) at Georgetown University‘s McCourt School of Public Policy has announced that the application window for the 2015 Reducing Racial and Ethnic Disparities in Juvenile Justice Certificate Program is now open through May 15, 2015.

The Reducing Racial and Ethnic Disparities in Juvenile Justice Certificate Program, held August 3-7, 2015, is an intensive training designed to support local jurisdictions in their efforts to reduce racial and ethnic disparities in their juvenile justice systems. The program is operated jointly by the Georgetown Center for Juvenile Justice Reform and the Center for Children's Law and Policy.

The three primary goals of the certificate program are to help jurisdictions reduce:

The program will also focus on the relationship between disproportionality in the juvenile justice system and disparate treatment in other child serving systems, including child welfare and education.

After completing the program, participants will be responsible for the development of a capstone project – a set of actions each participant will design and undertake within their organization or community to initiate or continue collaborative efforts to reduce racial and ethnic disparities in the juvenile justice system.

Visit the CJJR website where you will find further information about the program, including how to apply, tuition, and available subsidies for those with financial need. Questions can be sent to jill.adams@georgetown.edu.

According to the event announcement, “these next generation leaders gain a better understanding of the current juvenile justice system, examine trending reform topics, and participate in various skill-building, hands-on activities.” Agenda topics include: juvenile justice 101; keeping young people out of adult courts, jails, and prisons; and positive youth development. Additional interactive activities will connect these young leaders with key influencers:

Help identify emerging leaders in juvenile justice, and encourage them to register for the 2015 Juvenile Justice Youth Summit. We can help foster the next generation of leaders who will ultimately impact the future of juvenile justice.

Registration is now open. Register by April 30 for get the early bird discount rate.

All participants that register during the early registration period or using the non-member rate will receive a complimentary CJJ membership.

CJJ has a room block reserved at The Liaison Hotel for $189/night. To make your reservation you can call (866) 233-4642 or click here. Please reference the "Coalition for Juvenile Justice" group when making reservations or provide the following reservation ID: 15CJJ.

Translational research is concerned with moving basic (“bench”) research to clinical and ultimately practical benefit (“bedside”). If research can in fact demonstrate beneficial outcomes, then it may even lead to policy changes. 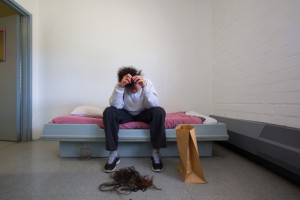 Approximately 30 percent of the country’s incarcerated youth are young girls—a rapidly growing group whose needs are not being met, according to significant research and practice indicating the juvenile justice system is catered towards boys.

Photographer Richard Ross has sought to display this through images. Over the past eight years, Ross has visited more than 200 facilities in 34 states and been given rare access to interview and photograph more than 1,000 young people in detention.

His work has resulted in two books Juvenile in Justice and the more recently released Girls in Justice—a close look at the daily lives of young women in juvenile facilities. 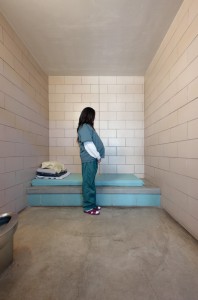 PBS NewsHour recently interviewed Ross on his latest collection of powerful photos, sharing a photo essay with commentary from Ross:

Ross said most of the young females he interviewed had remarkably similar stories. Few had committed serious crimes, and many had been the victims of either sexual or physical abuse before their arrest…
The stories he’s heard have been heartwrenching. Among countless stories of physical, sexual and emotional abuse, one 14 year-old girl recounted being raped at age 3, another admitted to being suicidal.
When asked what surprised Ross most about his project, he didn’t hesitate: “How many times I’ve cried,” he said.
See the full photo essay and interview on PBS.

We live in the information age. Reclaiming Futures sites and other jurisdictions engaged in similar focused reform efforts have access to information from multiple sources and disciplines such as: web-sites; journal articles, news; juvenile justice, behavioral health, psychology, sociology, education, social work, medicine and so on.

So how do we critically assess these sources of information? Let’s discuss by using an example.

Youth violence in the U.S. is the third leading cause of death for young people between the ages 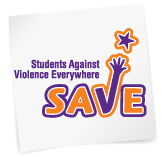 of 15 and 24—one of the many reasons National Youth Violence Prevention Week seeks to educate students, teachers, school staff, parents, and the public on effective ways to prevent or reduce youth violence.

Taking place next week, March 23-27, 2015, Youth Violence Prevention Week is founded by The National Association of Students Against Violence Everywhere (SAVE). The initiative kicks off with the 15th SAVE Summit March 21, and expands nationally next week to encourage communities to host events and workshops engaging students in the fight to stop shootings, bullying and other violence in our schools using the planning tools and resources in SAVE’s Action Kit.

According to SAVE, violence in schools has become devastatingly common in the United States (statistics sourced from the Center for Disease Control and Prevention):

During the week of March 23-27, SAVE will offer activity ideas for schools and community organizations across the country to host events educating youth on the potential of their positive impacts on their communities. Below are a list of events produced by SAVE and its sponsors:

The Campaign for the Fair Sentencing of Youth (CSFY) has released the first-ever set of guidelines to protect the rights of young people facing possible life imprisonment. Titled “Trial Defense Guidelines: Representing a Child Client Facing a Possible Life Sentence,” this 24-page report has been endorsed by a wide range of attorneys, child advocates and juvenile justice experts.

Sparked by the findings of the U.S. Supreme Court in the landmark 2012 Miller v. Alabama decision, the guidelines call for a “national standard to ensure zealous, constitutionally effective representation” for all juveniles facing a possible life sentence, citing Miller’s holding that trial courts must “take into account how children are different and how those differences counsel against irrevocably sentencing [children] to a lifetime in prison.”

The guidelines are based on 11 foundational principles including “children are constitutionally and developmentally different from adults,” “children must not be defined by a single act,” “juvenile life defense requires a qualified team trained in adolescent development,” and “juvenile life defense requires communicating with clients in a trauma-informed, culturally competent, developmentally and age-appropriate manner.”

Split into the following nine parts, these guidelines aim to strengthen and improve defense in juvenile life cases:

“The Trial Defense Guidelines recognize that children need to be treated as children when facing a possible life-in-prison sentence,” said Marsha Levick, chief counsel and deputy director at the Philadelphia-based, nonprofit Juvenile Law Center, in an email. “The guidelines also will ensure a child receives a meaningful, individualized sentencing hearing before imposition of a sentence.”

CFSY collaborated with attorneys and advocates from across the nation to create the guidelines. Visit the CFSY website for more information and access the full guidelines online.

Though alcohol and marijuana top the charts as the two most-abused substances by young people, synthetic drugs—the highly-addictive and highly-threatening substances—are still popular and easily accessible.

Beginning April 8, the Office of National Drug Control Policy will host two webinars to discuss the dangers of synthetic cannabinoids (“Spice”) and cathinones (“Bath Salts”), and to provide details on Federal and local efforts to confront these threats. The first webinar, featuring representatives from the National Institute on Drug Abuse (NIDA) and the Drug Enforcement Administration, will introduce these substances, and share insight into the manufacturing, distribution and health risks associated with synthetic drugs. It will also explain the Federal regulatory provisions and enforcement actions. The webinar will take place on Thursday, April 8, from 1-2 p.m. ET. To register, click here.

The second webinar, taking place later this month, will highlight case studies that demonstrate successful community initiatives to prevent use and distribution of synthetic drugs. Watch for details on the second webinar in the next issue of ONDCP’s E-Newsletter Update. Sign up here.

Some Good News: Usage is Declining

According to the National Institute on Drug Abuse, use of spice products (sometimes called “synthetic marijuana”) is declining, with 5.8 percent of 12th graders using the substance in 2014, compared to 7.9 percent in 2013 and 11.3 percent in 2012. And, less than one percent of 8th, 10th and 12th graders combined use cathinones (“Bath Salts”), which have been reported to result in sometimes violent behavior and even death.

It’s easy to see these low percentages and think that these synthetic drugs aren’t cause for concern, but in fact the impact of these scarcer drugs can have greater negative impacts on young people’s futures. Webinars like this ONDCP series are instrumental in informing mental health and juvenile justice professionals on the latest medical information related to new drugs, which can inform treatment programs on how to adapt to best serve youth.