Interrupting the School to Prison Pipeline Through Restorative Justice 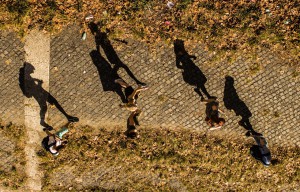 The following article was written by Fania E. Davis, Founding Director of Restorative Justice for Oakland Youth (RJOY). It previously appeared in The Huffington Post as part eight of a series from the Rosenberg Foundation on race and criminal justice. It is reprinted here with permission.

Growing up, Cameron Simmons endured a gauntlet of school suspensions, expulsions, and arrests that could have easily condemned him to a life behind bars or even to an early violent death--the present lot of many of his childhood friends. But things turned around for Cameron in the 12th grade, when he found himself at the doorstep of a restorative justice school in West Oakland.

Cameron was first suspended at the age of four. Here is how it happened. Every morning, when Cameron's mother dropped him off at school, she would hand him a bag of Skittles to quell the separation anxiety. One day, as Cameron entered the school building, the principal spied him with candy in hand. After a scolding, the principal reached down and grabbed the unopened bag of Skittles. Cameron's eyes were glued on the principal as he unlocked the door of his office, entered, and put the Skittles away in the bottom desk drawer before locking up and walking away.

The toddler was bent on finding a way to get his Skittles back. Resourceful even at that age, he noticed that, though the office door was locked, there was an open window. The window was high up, but there was a chair nearby. Cameron pulled the chair over, got on it and climbed through the window. He then walked over to the desk, opened the bottom drawer, and got his Skittles.

The principal suspended the four-year-old for two days--for theft.

With that one act, at the age of four, Cameron became entangled in a cycle often referred to as the "school to prison pipeline." Lots of suspensions followed for Cameron, mostly for fighting and "defiance". In middle school, he and a friend tossed cartons of milk at one another in the cafeteria, for which he was arrested and served time for assault. By 16, he had about 150 suspensions, four expulsion hearings, and several arrests.

Cameron's story is one among many. Parallel with the rise of the prison industrial complex over the last two decades, our nation's schools have been criminalizing our children instead of educating them. Use of exclusionary school discipline has doubled during this period, and for youth of color, the use of suspensions has grown 11 times faster than for their white counterparts. With the growing presence of metal detectors, wand searches, police, and wider use of suspensions and school-based arrests, our schools have been "prisonized". Normal adolescent behavior--like Cameron's milk fight in the cafeteria or cursing a teacher--is criminalized as assault. Writing on a desk with erasable ink becomes defacing public property. Even a 6-year-old having a temper tantrum is placed in handcuffs and escorted from the classroom by the police.

Our schools are creating pipelines to violence and incarceration instead of pathways to opportunity and success. Once ensnared, it's hard to escape from the system; juvenile incarceration is the strongest predictor of adult incarceration. One suspension from the 9th grade triples the likelihood that a child will be incarcerated while doubling the chance of dropping out, according to a UCLA Civil Rights Project study. Students of color throughout the nation are three times as likely to be suspended for the same offense as their white counterparts. In Oakland, once a child has been pushed out, there is a 67 percent likelihood they will be incarcerated. Seventy five percent of the nation's state inmates are dropouts.

Cameron's fate could have been the same. By 11th grade, having given up on school altogether, he was living on the streets and gangbanging. A year later, though, Cameron found himself at Ralph Bunche High School in West Oakland, a last-chance school for youth involved in the juvenile justice system. It just so happened that Bunche was then in the second year of implementing restorative justice school-wide.

Cameron noticed immediately that this school was different. Even though he wore a hoodie, sagged his pants, and came in with an attitude, not to mention a thick jacket of arrests, expulsions and suspensions, school officials didn't seem to be trying to stereotype him. From the day he arrived, the vice principal embraced him with the warmth of a family member. They all seemed to genuinely care and want to help--a first in his school career.

Within an hour of his arrival, the vice principal led him to the restorative justice room where a Circle was under way. He was shocked to hear young men like himself talking about their lives with such deep feeling--even at times tearing up. Instead of fighting through their differences, Bunche students were learning how to talk through them. Even the school police seemed to care and to want him to succeed. He barely remembers any fighting then and the school hardly ever suspended anyone. Instead, they used circles to make things right.

In this supportive environment, Cameron's lifelong cycle of suspensions, expulsions and arrests finally came to a halt. For the first time, he felt a sense of belonging. He felt seen and heard by teachers, administrators, school security officers, and other school staff. He started thinking more deeply and learning more about the history and culture of his people. In this environment, Cameron thrived, even receiving several academic honors in his senior year. He graduated with a 3.7 GPA alongside a larger group of other young men with histories like his, almost all of who were not expected to graduate before arriving at Bunche. One even became the class valedictorian.

Today, three years after graduating, Cameron works part-time with RJOY as a youth advocate, co-facilitating trainings and making presentations around the country. Recently, at one of the California trainings, he serendipitously found himself in the position of teaching the administrators of a high school that had suspended and expelled him just a few years earlier.

Cameron's childhood story is the story of our nation's school to prison pipeline. But, it is also a story that shows us how school-based restorative justice might interrupt the pipeline, not just for one child but for all. According to a recently released study comparing schools with restorative justice to schools without, from 2011-2014, graduation rates increased by 60 percent while reading scores increased by 128 percent. Suspensions of African-American students for defiance decreased by 40 percent. Chronic absenteeism in middle schools with restorative justice programs dropped by 24 percent, compared to an increase of 62 percent in schools without such programs. Harm was repaired in 76 percent of conflict circles, with students learning to talk instead of fight through differences at home and at school, and more than 88 percent of teachers said that restorative practices were very or somewhat helpful in managing difficult student behaviors in the classroom.

With more support for restorative justice on state and national levels and with other coordinated responses, we can make sure that stories like Cameron's are the rule, not the exception.

Fania E. Davis, J.D., Ph.d, is a Birmingham, Ala. Native and a long-time social justice activist, civil rights trial attorney, restorative justice practitioner and scholar with a PhD in indigenous knowledge. She currently serves as the founding director of Restorative Justice for Oakland Youth (RJOY).