More than 250,000 people watched and cheered from the sidelines at the annual Thanksgiving 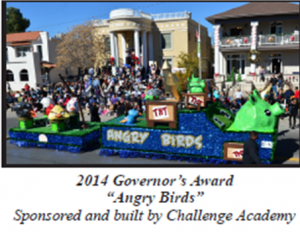 The teens who constructed the Challenge Explorers Float from the ground up are part of El Paso County’s Challenge Academy, a residential Reclaiming Futures program that is part of its continuum of care and an extension of El Paso’s pro-social activities for youth. These young men and women have been through the juvenile justice system, and oftentimes do community service as part of the Academy’s activities. Building a parade float—from concept development to construction to walking in the parade—offered participants the opportunity to get involved in their local community, and collaborate with staff and family.

“Oftentimes these kids have been outcasts most of their lives, and don’t know what it’s like to be a part of something bigger and be successful at it. To start a project from nothing, come together as a unit and produce a product that wins awards is instrumental in building self-confidence,” says Director of the Challenge Academy, Sam Heredia.

El Paso’s Juvenile Probation Department was extremely involved and committed to fundraising, coordinating activities throughout the year like selling popcorn, candy gram sales and ice cream float gatherings to raise money for materials and construction. Families of the teens also got involved as part of the Academy’s family reintegration program, donating supplies and working alongside them to build the award-winning float. The collaborated effort meant that not a dime of taxpayer or county money was spent.

Roger Martinez, Chief Juvenile Probation Officer, explains: “This initiative is an example of our response to the A&E show Beyond Scared Straight. We’re learning more and more through programs like the El Paso County Challenge Academy that positive reinforcement actually has a longer lasting impact. In this case, these teens were acknowledged in a positive way by their community, which has the potential to change their mindsets and lead them to become active community members once more.”

Since its inception in 2008, El Paso County Juvenile Justice Center has embraced Reclaiming Futures’ systems change approach through community collaborations and partnerships, which have served juvenile justice youth and families through continued services beyond treatment. These collaborations have expanded to include collaboration with the local FBI Office, Homeland Security and the Sheriff’s Department, in which members of these agencies volunteer their time to act as mentors to youth in the El Paso County Drug Court Program. Members also volunteer their own time to accompany juvenile justice youth to a local gym to teach alternatives to substance use and promote healthier drug free lifestyles.

Tapping into the creative side of juvenile justice involved youth, El Paso County partners with local artists and businesses for contributions, incorporating art into to the educational curriculum utilized by Delta Academy (El Paso Independent School District) or as a catalyst for these youth to express themselves without the need to engage in substance use.

El Paso County is a great example of strong community collaborations and systems change. We are proud to share their accomplishments and look forward to seeing what they strive for next.