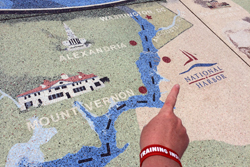 Last week I traveled to National Harbor, Maryland to attend the 2014 Georgetown University Training Institutes on improving services and supports for children, adolescents, and young adults with or at risk for mental health challenges and their families, along with Reclaiming Futures Fellowship Program Manager, Christa Myers.

This year the conference theme was, “Improving Children’s Mental Health Care in an Era of Change, Challenge and Innovation: The Role of the System of Care Approach” with an estimated attendance of 2,000. Below are my key takeaways.

The Youth Movement Has Arrived 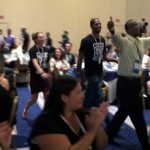 There was a great youth track at the conference – and more often than not you could hear fellow attendees in the hallways saying that these sessions were better than any others they had attended. 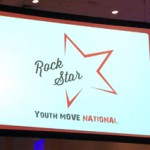 Both Youth M.O.V.E. National and local Youth M.O.V.E. chapters were well represented, along with many other youth organizations from around the country.  On Thursday night the 2014 recipients of the Youth MOVE Rockstar Awards were announced. The recipients were:

And a special shout out to Youth M.O.V.E. Saginaw for contributing the soundtrack.

The Power of Storytelling 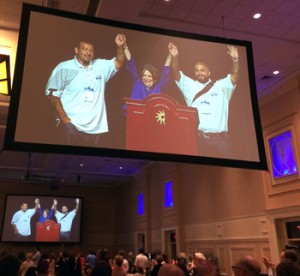 Storytelling is critical for organizations dealing with complex issues. The Power of Story Telling: Digital Voices in a Digital Age was a special presentation on the first day of the conference. This session showcased first person narrative video stories by youth from Washington state’s Youth N Action.

The NFFCMH is striving to make this year’s National Children’s Mental Health Awareness Week the best yet in honor of its 25th Anniversary as the voice for children’s mental health!

The theme for this year is Building a Circle of Wellness to recognize the NFFCMH’s focus on debunking myths, spreading awareness, and promoting not only positive mental health but also overall health for our nation’s children.

This week is designed for those at the national, state and local level to come together and strive toward the vision for healthy children and families. Get involved in any or all of the following ways to show your support for this cause:

Suicide is a critical problem for youth in the juvenile justice system. An upcoming webinar, Preventing Suicide Among Justice-Involved Youth: Newly Developed Tools, Recommendations, and Research, will describe a comprehensive set of nine new resources from the National Action Alliance for Suicide Prevention’s Youth in Contact with the Juvenile Justice System Task Force.
In addition to outlining these new resources, the webinar will also discuss the Juvenile Justice Task Force’s research findings and recommendations for staff working with this vulnerable population, which advance from the National Strategy for Suicide Prevention.
Alarming facts from the Juvenile Justice Task Force about suicide with youth in the justice system include:

This new magazine platform will combine video, text and photography to offer a multimedia picture of juvenile justice and the complex issues surrounding it. The first issue, released last week, includes the following feature stories:

Greetings from the Children’s Mental Health Research and Policy Conference, hosted March 2-5, 2014, by the Department of Child & Family Studies at the University of South Florida.
It has been a busy week with a robust agenda to expand research; translate the science to practice; expand initiatives to strengthen and sustain healthy communities; and improve the quality of life for children and families.
Research has shown a strong link to between substance abuse and teens seeking mental health care.
Stay tuned for lessons learned.
Photo at right: Portland State University was well-represented, as you can see from the contingency (left to right) John Ossowski, Janet Walker, Susan Richardson, and Nancy Koroloff.

Congratulations to Reclaiming Futures founder and former national director Laura Nissen on her appointment as dean of Portland State University's School of Social Work.
Laura is a tireless advocate for vulnerable people and works especially hard on behalf of communities helping teens overcome mental illness, drugs, alcohol and crime.
Do you have a fond memory of Laura or kudos to share? Please add your congratulations in the comments section below.

Whenever safe and appropriate, youth with mental health needs should be prevented from entering the juvenile justice system in the first place.

MENTOR: The National Mentoring Partnership recently released "The Mentoring Effect: Young People's Perspectives on the Outcomes and Availability of Mentoring.”Via the press release (emphasis mine):

The publication links mentoring to significant life outcomes for youth and highlights a substantial gap that exists in America: one in three young people will reach adulthood without having a mentor. A nationally representative survey of youth informs this report, which reveals that at-risk youth with mentors are much more likely to attend college, participate in extracurricular activities, take on leadership roles, and regularly volunteer in their communities. The publication outlines opportunities for the public, private, and philanthropic sectors to integrate mentoring as a key youth development strategy.

Will yours be one of five states selected to receive expert technical assistance to help young people? You won't know if you don't apply.
Applications are being accepted for Improving Diversion Policies and Programs for Justice-Involved Youth with Behavioral Health Disorders: An Integrated Policy Academy-Action Network Initiative, made possible with support from the Substance Abuse and Mental Health Services Administration and the John D. and Catherine T. MacArthur Foundation.
Selected states will convene core teams of senior-level officials at the state and local levels to implement a school-based or probation-intake diversion program for youth with behavioral health disorders. This work will emphasize:

The full announcement and application materials are available for download at www.ncmhjj.com. Applications will be accepted through Friday, February 28, 2014.

It's no secret that adolescence is a time of transition with unique challenges and pressures for both girls and boys. The Girls Matter! webinar series aims to turn the attention to how these challenges and pressures affect adolescent girls. One in four adolescent girls experiences a behavioral health problem, but research shows a gap in services, support, and important behavioral health care for adolescent girls—the very tools that help girls successfully transition into adulthood.
The Substance Abuse and Mental Health Services Administration (SAMHSA) is launching Girls Matter! in an effort to bridge the gap between services, support and health care for adolescent girls with behavioral problems by providing professionals with information about the critical needs of girls today. The six-part series features professionals from multiple fields and specialties who share a passion for helping teen girls thrive. Continuing Education Hours NAADAC and NBCC CEHs are available through the ATTC Network Coordinating Office.

The Collaborative for Change promotes the mental health reforms that came from Models for Change by supporting their adaptation, replication, and expansion in the field. Its primary areas of focus include critical topics such as: mental health screening, diversion models, mental health training for juvenile justice staff and police, evidence-based practices, family involvement, and juvenile competency. We offer a 24/7 online Resource Center, a Help Desk, and are available to provide consultation and technical assistance.

Watch the video below to learn more about how mental health treatment can help teens:

The Juvenile Justice Information Exchange (JJIE) recently hosted a webinar exploring issues around journalism and juvenile justice system. Via JJIE:
Say you've just been assigned to do a story on a 15-year-old kid in trouble with the law. She's got drug problems, she may have mental health issues -- is her story unusual? If her probation officer tells you the girl has been sent to treatment, but it "didn't work," how do you know what questions to ask next?
Get the answers and more in this webinar, where you'll learn about:

About the presenter: Benjamin Chambers is a writer and editor specializing in juvenile justice who currently works as communications specialist for the National Juvenile Justice Network. Prior to that, he spent seven years working for the Multnomah County Department of Community Justice in Portland Oregon, where he directed the local Reclaiming Futures project.