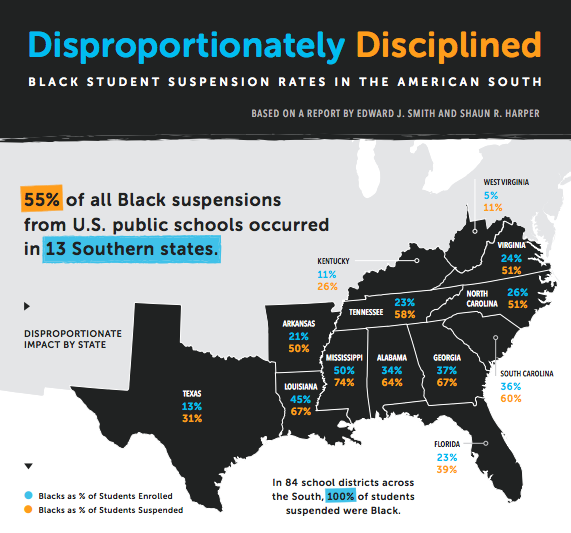 Mounting evidence shows that minority youth populations such as African Americans,
Hispanics, girls and LGBT youth are more likely to be suspended and expelled from schools, and put on a path that often leads to the juvenile justice system.

As a juvenile justice or behavioral expert, leveraging evidence-based research, especially new research, is one of the most effective ways to promote change to your communities or elected officials. To equip you with the tools needed to pave pathways to equity in the juvenile justice system and school settings, consider these five 2015 reports and takeaways demanding equity.

13 Southern states are responsible for half of all suspensions and exclusions of black students nationwide.

A new study by the University of Pennsylvania, which examined more than 3,000 school districts in Southern states, illustrates the disproportionate impact of K-12 school suspension and expulsion on black students in that region.

Among the solutions recommended by the report: hold schools accountable, eliminate zero tolerance practices, and educate the educators about implicit bias.

31 percent of girls in the juvenile justice system have been sexually abused, four times higher than the rate of boys.

Demanding more mental health and trauma services for girls, a report from Rights4Girls, in conjunction with the Ms. Foundation for Women and the Georgetown Law Center on Poverty & Inequality, reveals how the “Sexual Abuse to Prison Pipeline” is especially pronounced among girls. It reveals staggering findings for young traumatized girl, girls of color, and lesbian, gay, bisexual, transgender, or gender non-conforming (LGBT/GNC) girls:

Girls of color are six times more likely to be suspended from school than white girls.

In Boston, the report revealed an alarming disparity in discipline: even though there were about three times as many black girls as white girls enrolled, black girls were 11 times more subjected to discipline than their white counterparts. In New York City during the 2011–2012 year, 90 percent of all the girls subjected to expulsion were black, yet no white girls were expelled.

All three of these studies call for action to pave pathways for equity and restoring justice. Did we miss any that you find valuable? Let us know in the comments below.